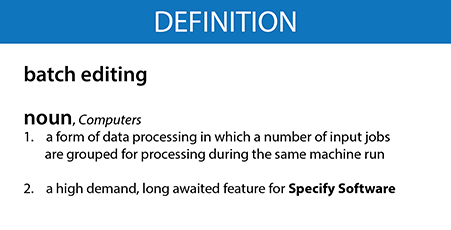 We received emails. We received phone calls. We accepted cookie offerings. And we were cornered at society meetings.

So, in response to the pervasive and occasionally high-caloric expressions of interest, the Specify Project is pleased to announce that we are well underway with engineering Batch Editing capabilities into Specify 6.

Honestly, we had been a little apprehensive about adding this capability to Specify because of our experience with Batch Editing in Specify 5. Back then it was a difficult to clearly convey to Specify researchers the extent of the changes batch editing could make to linked relational data records. We helped several Specify 5 sites recover from the unintended consequences of overly exuberant batch changes.

But appeals made by collections researchers at SPNCH 2017, Botany 2017, and at ASIH in 2017 were ultimately convincing. When we landed back home, we moved Batch Editing to the top of the Specify 6 new feature list. Developer Tim Noble is using the functionality of the Specify WorkBench toward that goal, which has allowed him to make rapid progress. Specify users who are familiar with the user interface and operation of the WorkBench will find the Batch Editing interface familiar and intuitive.

If you would like to be part of the Batch Editing Beta test group, or wish to offer feedback, please contact us at [email protected].

The University of Kansas Biodiversity Institute is underwriting the cost of this Specify 6 development. Our current US NSF funding supports Specify 7 and Consortium development costs.